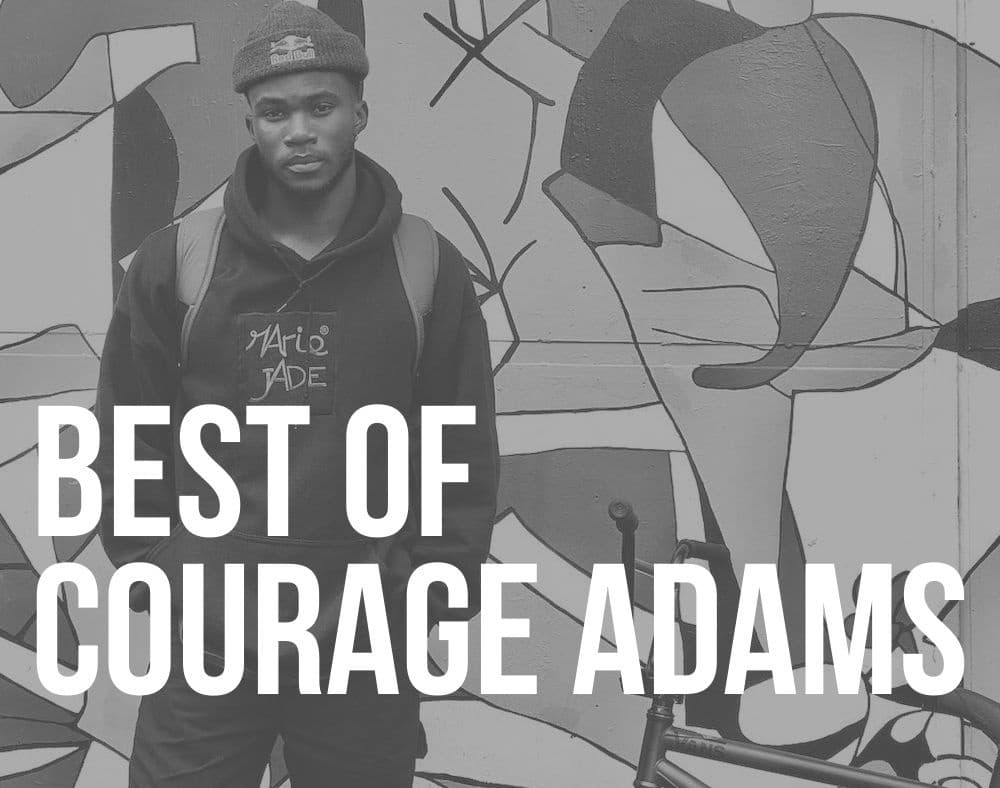 I have the best Courage Adams BMX videos for everyone who’s into insanely technical street riding.

Whenever something new pops out from Courage, I drop everything and watch it immediately. Why?

Because I know it is going to be INSANELY good from start to finish. And even if you think you saw it all already, you are wrong.

Indeed, Courage is full of surprises, thanks to his outstanding bike control.

Especially on the front wheel.

If you are into insane BMX trick combos – especially on the front wheel – get a daily dose of Courage’s madness by following him on Instagram.

Note: Take a peek at the most recent Courage Adams bike check.

Another epic one from Courage because what else would you expect? And because it’s Rich Forne who filmed and put it together, you know it will be EVEN better.

The lengthy feeble to even longer nose manual to feeble to hard 180 bar was insane. But I don’t want to reveal too much.

And the last one was definitely unexpected. Wow.

(All was shot at great street spots in Africa, France and Spain.)

Watch the creative madness unravel before your eyes. Worth every second of my fifth rewatch.

Red Bull sent Courage to Johannesburg, South Africa, to enjoy the streets and the local scene. I’m always impressed by everything that Adams releases with his sponsors. (You just know it’ll be good.)

This dude is so smooth at such a high level of riding that it’s almost absurd. And it’s not only about the nose manuals (which I like the most, btw!), everything he does and touches comes out golden.

Enjoy his South African experience with the locals, hitting some really amazing spots. And his perspective on the scene and (life) projects like this, too. Go!

Even though I usually don’t post videos from contests in my video collections, I think this one deserves it.

After some unlucky attempts at past contests, Courage finally scored the podium – actually – 1st place at Fise Montpellier 2022!

The run is pretty much perfect.

And I’m incredibly impressed by the last (extremely) long nose manual after landing the big truck over the rail, pushing the bar slightly forward because of the impact.

Okay, this may be extremely short, but it’s worth every second of it. Inside is one of the biggest street barspins in the history of BMX – the legendary Lyon 25 stair set.

Also, this is the official introduction of Courage to the Vans‘ Global team. Not just that, also the official announcement of his signature slip-on.

If a slip-on can take 25 stairs, it can handle anything.

I absolutely need to add this behind-the-scene video of Courage’s Lyon 25 stairs barspin.

Courage must be built of steel, because the impact is so brutal, I don’t know how he managed to stay on his bike.

In true Courage style, this is absolutely MENTAL. I needed to rewatch it multiple times so that everything sunk in and my speechlessness went away.

I won’t explain tricks and everything too into detail since I don’t want to ruin your watching.

But I’m quite sure you’ve already seen it because how can you even miss something like this in your life?!

One thing: long wavy nose manual to tailwhip. And the drop isn’t even big, but Courage pulls it so extremely smooth as if you’d pull it over a jump box.

This event contains a couple of contests like park, street, and flat. Courage is always taking part at FISE Montepellier Street contest so this was one opportunity that he could not miss.

He is nose manual king and the opening shot proves that. How is this even possible?

The dude knows how to nose wheelie in; then he finishes with a banger trick at the end of the line.

This is just a 60-second clip, but man Courage never disappoints.

Rich Forne filmed this masterpiece. When you combine a master behind the lens and a master on a BMX like Courage, you will get one unforgettable video part.

Like the title says Courage, you need to have a lot of courage to do these kinds of tricks on the streets.

The opening clip starts really strong with an insane and creative line and after this, Courage explodes with a variety of bangers.

With all the b-rolls in the clip, it makes you stay glued to the screen till the end because you know something big is coming.

2019 was the year when Backyard Jam made a comeback. This event was hosted at a skatepark called Adrenaline Alley in UK.

Courage qualified first in qualifications and he came back with a very strong run. He made a line like manual to bar to manual to bar ice on a down rail like nothing.

He destroyed the street course that day. When he gets that momentum and all the tricks in his mind come together, nobody can stop him from winning.

This clip is a mix of qualifications and finals, so click the play button above and enjoy.

FlyBikes took two best street riders in the world to the best place on earth for street riding: Barcelona, Spain. With the help of some locals like Simone Barraco and Anthony Perrin, Courage and Devon Smillie took full advantage of the spots of Barcelona.

What do you get when you put on one spot Devon with insane combos and on the other site Courage with a crazy bike balance?

You get an unforgettable video part that you can use as motivation before you go out riding. The manual and the nose manual kings, if you will.

Wallride on a curved bench to nose many to bar out is just one of the craziness you will see in this video.

Courage left his home country Nigeria when he was seven years old. He moved with his family to Spain.

He came on the BMX scene like a hurricane and everybody wanted more and more from him.

The kid is an amazing BMX rider with a lot of skills on his front end. This is a small documentary of Courage’s life in Spain and his return to his homeland Nigeria.

He explores the streets of Lagos with a local Lagos BMX crew.

This video part was made in 2016 when Courage became a team member of the famous Animal Bikes.

Man, I was thrilled when I saw this announcement because we all know that Courage is one of the best street riders in the world.

Best rider plus legendary brand, which has on the team best street riders in the world is a very good combo.

Courage starts his part with a strong trick and continues at the same pace until the last stunt. The last trick is just bonkers.

There is a good flow in this video regarding riding and music, too.

As the title says, “7 Days It All It Takes,” that’s how much it took Courage to film the FlyBikes part.

As we all know, back in the days, most riders took a lot of time to make video parts for the brands.

Some of the riders still do this kind of approach with their projects.

We are at this point where young riders can’t wait for what they have learned and immediately want to show their progression.

With all the media around us, this is now normal for young guys. Courage used this to his advantage and produced an amazing video part in just seven days.

He is a cat on his front wheel and he is probably one of the last riders who don’t use freecoaster for all back wheel tricks.

We all know that Courage is good on the front wheel, but the start of this clip shows what looks like a long nose wheelie to a sick combo in the end.

The video was filmed at his local concrete skate park in Madrid. Don’t be fooled that Courage can ride only the street; he is also a very good transition rider.

You can put him in any situation and he will show you what he is capable of. Let’s be honest, who does nose up on a ledge and 360 out of it?

Some of us struggle with a regular nose manual. Don’t sit on it and hit play.

Everybody knows how good is Courage on his little bike. He has incredible lines, combos, and a very good style on his bike.

This video is no exception. He puts his signature line called Savanna to a proper test.

Just go to a one-minute marker where you will see how this dude rides on his front wheel.

Heck, start from the beginning and pause at one minute, take a pen and hit play and take some notes.

When you are done watching this video go to the FlyBikes website and check the whole Savanna line from Courage Adams.

Note: Videos above are listed in no particular order (but the newer ones will be put on top).

For Courage Adams, it all began when he was around eight years old in Pamplona, Spain.

He went to a local skatepark with his friends, where he saw guys riding “little bikes” and doing all sorts of tricks.

In a short interview, he says that it was LOVE AT FIRST SIGHT for Courage.

“BMX means inner peace for me”

When it comes to BMX, Courage really likes the freedom of freestyle. Let’s face it, you are your own boss and you can do whatever you want.

Keep it simple, keep it tech, go big, go small, whatever the case, it’s all possible through BMX. But one essential thing is to have fun.

All the rest will come; you just need to give it time.

Needless to say, Courage is having the time of his life, being at the top of the BMX game.

Riding for Flybikes (check his signature street frame), Red Bull, Vans and Animal Bikes, and the list of sponsors goes on.

A few of the dudes that are part of the brands that Courage is are Sergio Layos, Simone Barraco, Colin Varanyak and Broc Raiford. (I have best-ofs for all!)

Friendly Reminder: Save Up To 50% On Source! (Click Banner)
Disclosure: The BMX Dude's content is free & reader-supported. I may earn a commission if you click & buy through my links. Your support helps me create the best content & make a difference. Thanks! 🤘
animal bikesbmxcourage Adamsflybikesred bullvans 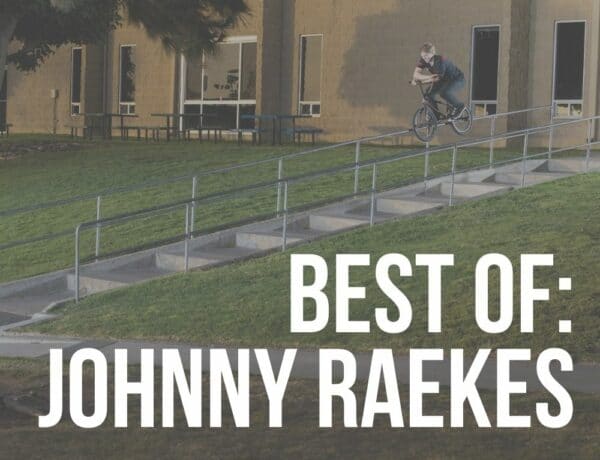 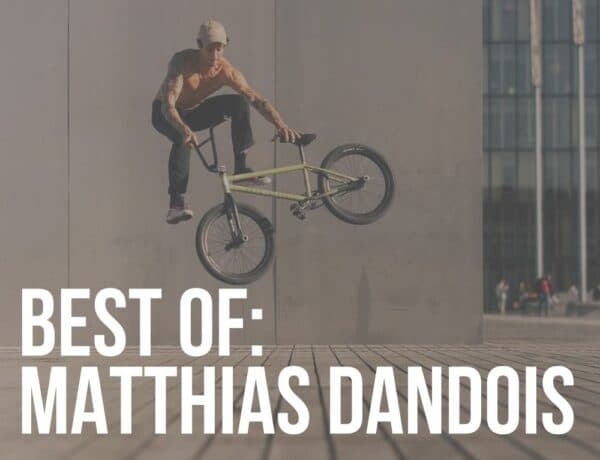 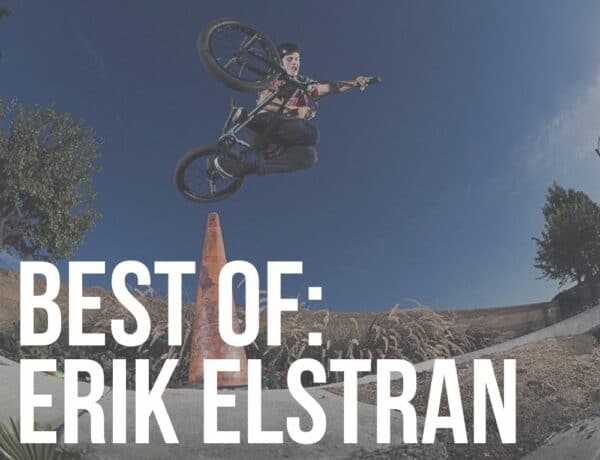