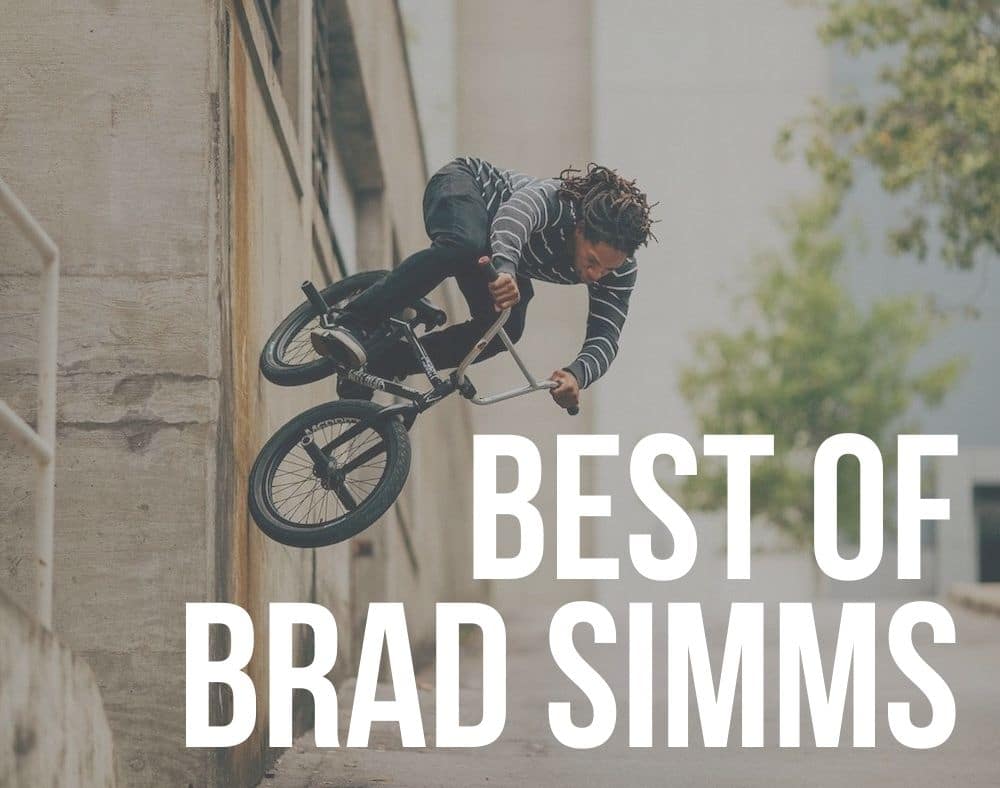 So many asked me to create a collection of Brad Simms BMX videos, so here you go, dudes!

Everyone knows Simms, even if you just joined the BMX space.

He’s been in the game for a very long time now.

What’s truly impressive and inspiring, he had one of his biggest years at 35 in 2020.

This just shows that dedication, passion and hard work will eventually pay off.

After all, years are just numbers, so why limit yourself in any way, shape or form?

Anyhow, back to Brad now. He got his start due to his uncle, but before that, football was his passion.

Who is Brad Simms?

Brad is one of those BMX riders who like to do stuff in their own, unique way.

He will ride spots and objects that you would never have thought were rideable.

Not just that, but he will pull skatepark tricks on the street with such smoothness that it will make your jaw drop.

Who does Brad Simms ride for?

The rider who is truly pushing the limits of BMX, Brad Simms, is representing Adidas, Five Ten, Maxxis Tires, and 5050bmx.

You absolutely must watch Brad’s UNCLICKED podcast if you’d like to know him even better and what’s his story.

If you need inspiration when it comes to BMX and witness that everything is rideable, you better give Brad a follow on Instagram.

Since Brad is blowing up all over the place, getting all the shine he deserves (!), Our BMX put together this excellent documentary about him.

This is the story of Brad.

Learn about his past, Target travel budget, why sponsors started ditching him, how he “planned” everything to be where he is today, and more.

Note: The only thing I’d also add to the video is that Brad was already well into his 30s when he got invited to X Games Real BMX (2018).

Brad is cruising the streets of Austin, Texas. He finds some random spots and some more famous spots in Austin. This is what BMX street riding looks like.

You drift around with your buddies and find random spots to ride and have fun on them.

Brad is always looking for “strange” spots that only he can ride. He has his unique approach to spots and makes everything rideable even if it is not.

He even makes a blank wall rideable and it looks good. Who does that?

While this was the welcome to the team video/clip for Instagram originally, Darryl Tocco decided to upload it to YouTube to give you the 4K version of it.

And even though there aren’t too many tricks in it, you know it’s a banger because everything Brad does is a banger.

The first quick manual 180 is INSANE!

For the 2019 X Games Real BMX street video part, Brad teamed up with Christian Rigal and they produced one intense video edit.

It starts with a massive wallride, which I think only Brad can do, making it look super easy, which is not.

You need to have a lot of power to pull something like this.

He usually finds spots that no one can even touch with BMX.

This edit is short due to the contest rules, but it packs a lot of insane things that can you would expect only from Brad.

As the title says, Brad won a bronze medal with his video part for X Games Reel BMX 2019. This is a behind the scene video, revealing some insights.

He speaks about his unfinished business in NorCal, where he did some things and didn’t get them.

They had a good start filming for this contest, capturing some great clips, but, unfortunately, one of the spots took him down.

Brad broke his finger and he was off his bike. But he came back even stronger and finished this project.

Even though he got injured, he got an X games Bronze medal – not too surprising for Brad. Congrats!

Brad filmed many video parts and video edits, and now he films a lot for his Instagram account.

In 2018 he was also part of the X Games Reel BMX contents, with filmer Christian Rigal.

This dude has so much pop that he can easily do a big wallride and then hops from a wall over a big fence. Wicked.

Brad was always known for doing big stuff on big spots. This edit is no exception.

He tried some of the things that didn’t work out for this edit, but he returned and did them in 2019.

7. Brad and the impossible wallride

Brad talks about the impossible wall ride he did for his Fit welcome edit.

In the beginning, you will see that he first tried to bump to bunny hop on a big stair set but it kinda didn’t work.

He got some ideas to do a wallride next to these stairs and he said it is possible.

Only Brad can do this kind of stuff. He says that he got ten to eleven flats on this spot.

This is one of the most challenging things I have seen on a BMX bike.

Check out this behind the scene video and after this go and check out welcome to Fit edit – again.

Brad teamed up with Rich Forne to film some stuff in Israel. This was in 2014 when we could fly anywhere we wanted.

At the beginning of the edit, you can see how much work goes into one trick. After this, it goes off with one of the casual Simms lines.

The whole edit shows his ability to ride everything on the street. He doesn’t need any specific spot, he can do anything anywhere.

The last two clips in the edit are just mind-blowing. That is Brad’s magic, so make sure you do not miss it.

Brad has traveled all over the world. This is an edit filmed in eastern Europe.

This is his version of tourist life and seeing the world.

Brad is known to travel to different countries, living a nomadic lifestyle and making new BMX friends wherever he goes.

At one point, he even lived in Poland for some time.

Brad is also very keen to learn the language in the country he is staying in. Not everything but some words so he can go by easier.

As usual, he searches for the biggest setups on the streets. All riders love Brad for his ability and his kindness.

Friendly Reminder: Save Up To 50% On Source! (Click Banner)
Disclosure: The BMX Dude's content is free & reader-supported. I may earn a commission if you click & buy through my links. Your support helps me create the best content & make a difference. Thanks! 🤘
5050bmxbrad simms 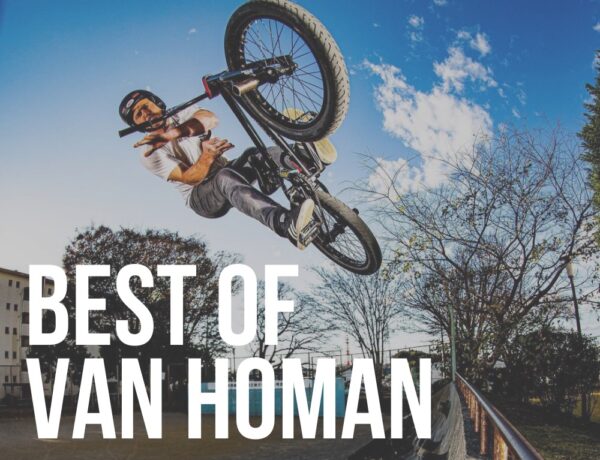 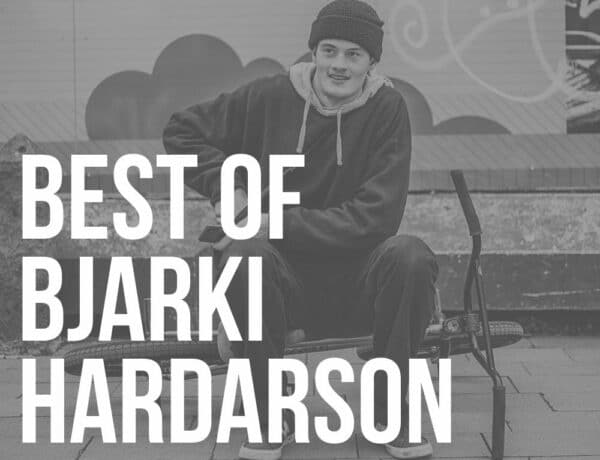 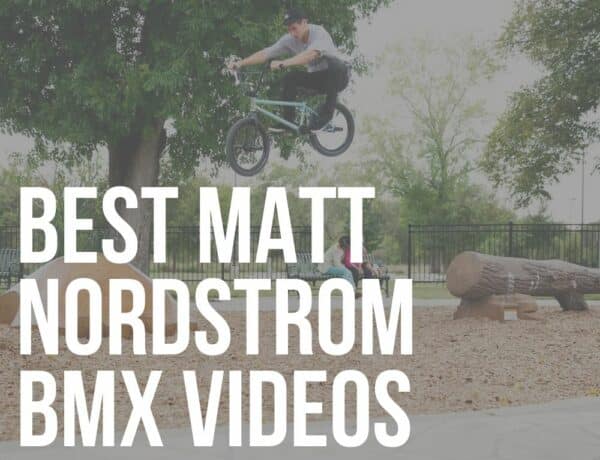