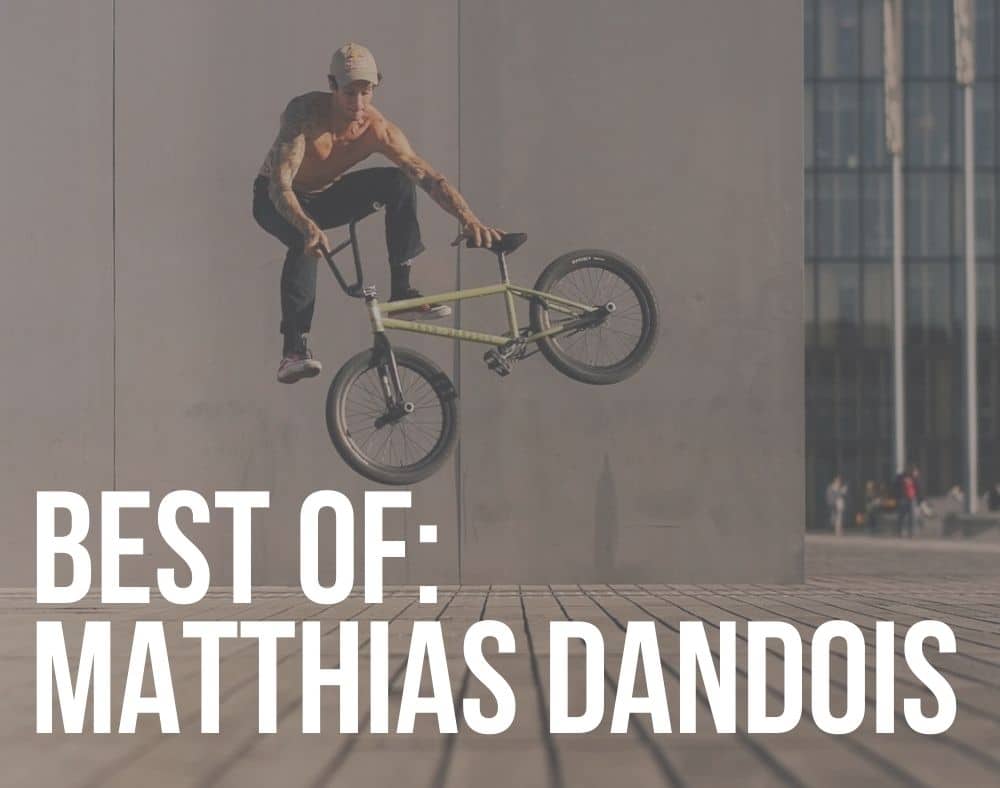 Are you looking to enjoy the ultimate collection of the best Matthias Dandois BMX flatland videos?

This was SO FUN putting together because I always enjoy watching his innovative approach to riding!

Mixing flatland and street riding in a creative way blew the entire world away. There’s none out there like Matthias, and you know that!

Matthias said that he’s a sporty kid in an interview, but he discovered BMX at 12 through a TV show.

He received his first bike that same year for Christmas, and everything went from there. Matthias also had a squad back then who were more or less fooling around, but soon things escalated.

You can also get to know him a lot better through this excellent interview:

Since we’re speaking about flatland, don’t forget to check our selection of the best flatland frames.

This new promo for Matthias’ signature Haro La Bastille V2 frame is – AS ALWAYS – a must-see. Flatland and street at their finest.

Matthias is one of the dudes who enjoy traveling a lot and combining it with BMX is pure bliss.

A very well done video filmed and edited by Pierre Blondel that you absolutely need in your life. There are even a few guest clips from Arnaud Malthieu!

Matthias always knows how to surprise with his creative riding, bringing pleasure to viewers.

This is dope. This is beautiful.

Red Bull is no stranger to putting together epic projects, and this new one with Matthias is at level eleven.

For this one, they flew Matthias to Kitzbühel, Tyrol, where he teamed up with Camo & Krooked and the Max Steiner Orchestra. What a combo.

You get a dose of everything, from the finished work and a ton of great behind the scenes, the challenges, and more.

All there’s left for you to do is to sit back, relax and enjoy the goodness.

Here we have a Vans video with Matthias Dandois called Off The Grid.

This one was released in August of 2021 and took place in a scenic parking lot where Matthias effortlessly does some of the most technical flatland riding you will ever see.

The way he moves the bike and himself around the bike could not be smoother or more perfect and it is always enjoyable to see.

The music for this one, combined with the mesmerizing flatland riding, makes for a video with an ethereal feel that will draw you in from beginning to end.

Matthias Dandois has been on top of the flat land game for as long as anyone can remember and with that he has also ridden for Haro for about the same amount of time.

Here is one from mid-2018 with Matthias riding street and flatland from Haro.

The video starts with a gnarly crash but quickly transitions into some incredible connections back and forth between street and flatland.

The way Matthias can connect what seems like any flatland trick he wants to with simple things like fakies out of grinds is absolutely amazing.

There are also a few bigger moves here, with things like a huge half cab over a bench and a gnarly drop.

5. Unlocked Down – A Midnight Cruise in Paris

This video came out in December of 2020 and was shot in November when the world was in a very crazy place.

The description describes the streets of Paris as quiet and empty as well as a perfect playground for BMX.

The video begins with an awesome transition from day to night and continues as Matthias rides by extremely recognizable locations in the city.

This video is beautifully shot and put together with a song that is hard not to enjoy.

Everything in this video comes together for an amazing watch from the b-roll, to the song, to the riding.

Here’s a quick one with Matthias Dandois from all the way back in 2011.

It is amazing to watch a video like this one from over 10 years ago and see how Matthias has progressed since then and how incredible he was back then.

The effortless linking of lines and combos is nothing short of amazing to watch and it is easy to see why Matthias has remained at the top of the flatland game ever since.

Red Bull and the name Matthias Dandois have been somewhat synonymous with each other for quite some time in the BMX world.

The projects they have produced in conjunction with each other have been amazing throughout the years, including this video that goes back to mid-2012.

This may even be part of Matthias’ early success with the name of this video being Dandois emerging BMX style: Street-Flat.

The title describes the video perfectly in the riding and as expected from Red Bull, the production value is over the top in quality.

After a very cinematic intro, Matthias begins to combine a few different street style obstacles with flatland. It is a cool video to look back on now because it came out so long ago!

Here we have a video with Matthias Dandois from Swatch called Secret Spots in mid-2021.

This video is much more than just riding and opens with Matthias introducing us to the idea of his secret spots in Paris, France.

There’s quite a lot of riding throughout here and some amazing videography showing different landmarks.

If you’re looking to get to know Matthias a little more this is definitely a video you’re not going to want to miss!

It seems like Matthias Dandois has had the same sponsors forever as a BMX flatland rider.

This can only be good when you ride for companies like Red Bull and Vans.

When you have this kind of longevity as a rider, there is a lot to look back on. For example, here we have Matthias’ Vans video from 2015.

This video opens with a snapshot tour of his tattoo collection and is followed by a lot of awesome riding that one might consider conventional street BMX riding.

Following is what can only be described using a term from his previous videos and that is, Street-Flat.

Matthias combines the two in a beautiful image of riding that is all his own.

In 2014, this video welcomed Matthias Dandois to the La Crèmerie pro team. La Crèmerie is a BMX store out of Paris, France and this video came out way back in early 2014.

When it comes to the video itself, we first see a few very disheartening falls for Matthias.

These then transition a nice mix of the incredible flatland riding we know Matthias for along with some skatepark and street clips.

Matthias always puts on a display of amazing riding in this video that serves as a great chapter in his BMX story.

Here we have a quick video uploaded to the XtremeBMXride youtube channel with Matthias called Malaga.

This video came out in early 2014 and has a great mix of BMX street and flatland in signature Dandois fashion.

Matthias’s balance and pure skill for BMX is nothing short of incredible.

There are a few pretty burly gaps in here and the flatland riding that shows how well-rounded and talented Matthias is on his bike.

For as long as many of us can remember, Matthias Dandois has been on a Haro bike. Here we have a video with Matthias for Haro Bikes from late 2016.

The video starts with Matthias leaving his house and shows some beautiful scenery before seeing the always excellent street-flat style he has become so well known for.

At times, this video leans more heavily on the street side of things with tricks like feeble grind to g-turn and big half cabs.

There’s also some burly riding in here, with a big gap over a rail.

The majority of the riding here from Matthias is flatland and as always, it is incredible and timeless!

Here we have Matthias Dandois’ Europe Team Edit from mid-2012.

The intro to this one is awesome, with some epic cinematic orchestral music paired with different wrecks and fails that come together to make a great beginning to this video.

Old videos like this are always awesome because they feel like chapters in the book of riding for whoever is in them and this one is no exception.

It’s amazing to see the level Matthias was at so long ago and to think about the fact that he has remained a mainstay in the flatland community.

The riding in this one is flawless as always as well and is also enjoyable to watch as always. 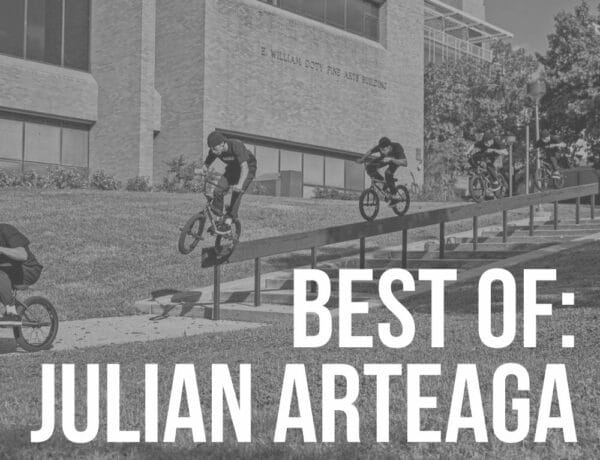 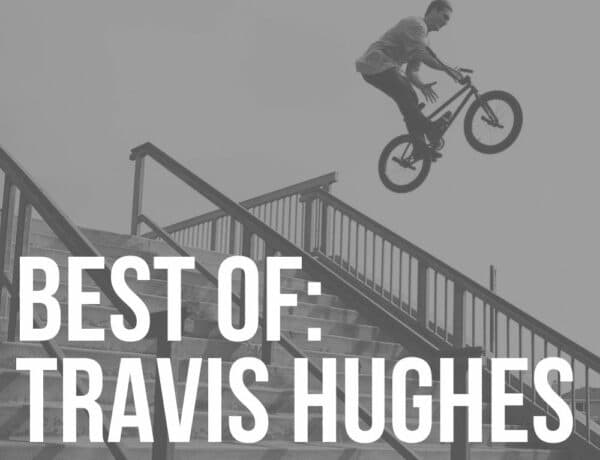 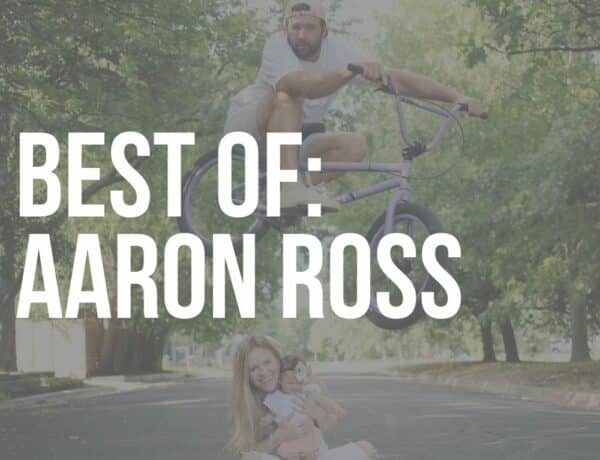